The main part of Zilker Park lies north of Barton Creek, but about 10 % of the park lies south of Barton Creek and is further bounded by Azie Morton Road and Barton Hills Drive. This area includes the south gate to Barton Springs Pool, sports fields, the Sunken Gardens, and part of the Anne and Roy Butler Hike-and-Bike Trail. This area also includes natural areas with native trees, flowers and grasses that are enhanced by two small waterways. Little Zilker Creek is a small channel that parallels the sidewalk along Azie Morton Road. This creek receives stormwater runoff from the Zilker and Barton Hills neighborhoods, flows over the Barton Springs recharge zone just after it crosses under Azie Morton Road, and then flows into Barton Creek just downstream of Barton Springs Pool. Little Zilker Creek also diverts water from the Old Little Zilker channel which carried stormwater directly into the Barton Springs Pool near the diving board. While technically within the Barton Hills Neighborhood boundaries, residents of both neighborhoods (Zilker and Barton Hills) benefit from this part of the park. To see how South Zilker Park has changed over the years (1940-1921), see this 12-page PDF (8.5 MB).

In 2014, at the request of the City’s Watershed Protection Department, a volunteer neighborhood group was formed to enhance the beauty and ecological functions of Little Zilker and Old Little Zilker Creeks and their surrounding watersheds. This work built on the “no-mow” zone that had been established in 2012 by the City’s Watershed Protection Department and the Parks and Recreation Department (PARD). Prior to that, Little Zilker Creek was a mowed, trash-filled channel whose only function was to move stormwater from our neighborhoods into Barton Creek but provided no real ecological or aesthetic benefits. Working under watershed restoration plans approved by Watershed Protection and PARD this Friends group, composed of residents of Zilker and Barton Hills neighborhoods, works to control invasive species; plant and protect native trees, grasses, and flowers; and clean up trash in the area. Additional guidance and support are provided by Keep Austin Beautiful, Austin Parks Foundation, TreeFolks, and the Texas Conservation Corps. The restored streams filter pollutants from our neighborhoods’ stormwater runoff, lessen erosion, mitigate flash flooding, and enhance wildlife habitat. "Before" and "after" photos attest to how quickly streams can be restored. In the fall of 2017, the Austin Parks Foundation awarded the Friends of South Zilker Park a Community Grant of $7,500 through the Austin City Limits Music Festival Park Grants Program. Funding was used to improve the Little Zilker Creek and Old Little Zilker Creek waterways that flow to Barton Creek. For a map and description of the improvements made to South Zilker Park, see this PDF.

Over six years (2014 – 2020) neighborhood volunteers have contributed at least 1500 hours to the enhancement of South Zilker Park. Periodic workdays are typically held on Saturdays and on some weekday mornings. Tools and gloves are provided. Children age 13 and under must be accompanied by an adult at all times.  Workdays may be announced on the ZNA Calendar Page and Zilker listserv and in ZNA newsletters.  To put your name on the list for notification of upcoming workdays, please contact Gail Rothe (grothe@austin.rr.com). 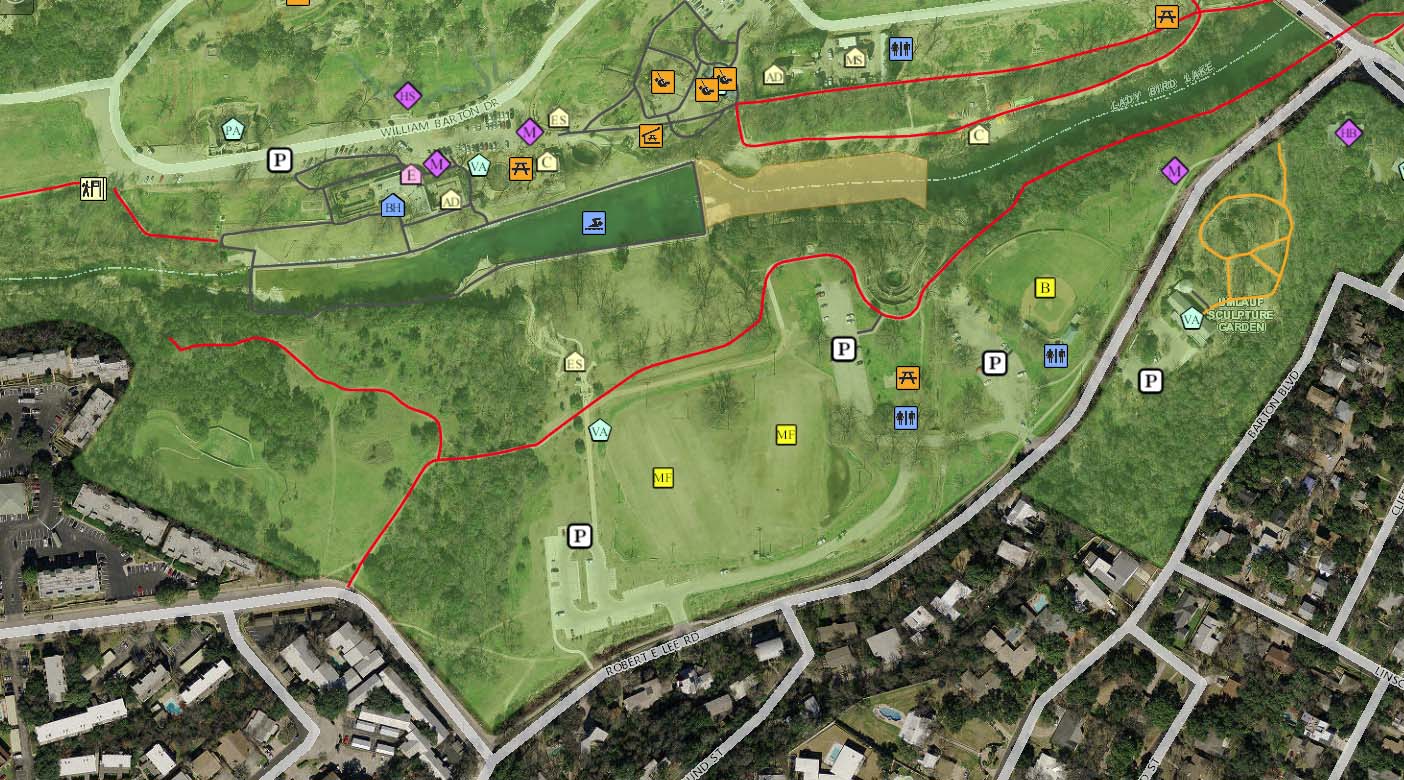